May 20, 2013. Shanghai – A multinational group of about 70 guests today came together at CEIBS Lujiazui Institute of International Finance to discuss the growing business ties between the two emerging markets during CEIBS’ annual “China Meets Africa” Conference. Among them were 38 students from CEIBS Africa EMBA12 class who had completed their oral defence in the morning, as well as several alumni from the event’s co-organizer CEIBS Alumni Shanghai Chapter (Lujiazui). 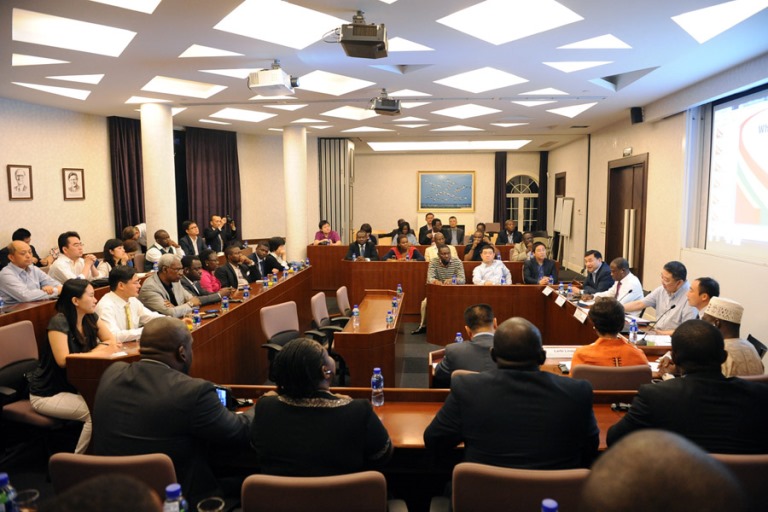 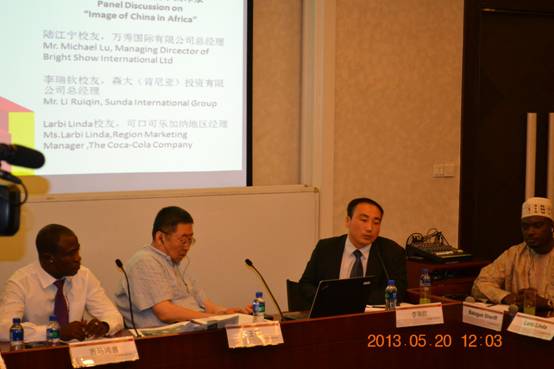 In a brief opening speech, Mr. Chen Zhihai provided the visitors from Africa with an overview of the CEIBS Alumni Chapter in Lujiazui, the largest of all Shanghai district chapters, and the Pudong district. He assured them of the Chapter’s support if they would like to visit or do business in Pudong.

Following Mr. Chen’s remarks, Prof. Atuahene-Gima expressed his hope that through events such as today’s conference, CEIBS can bring China and Africa closer together and help find a solution to problems that hamper cooperation. He stressed the networking aspect of the evening through which new business relationships and friendships could be formed and hoped that the students and alumni in Africa viewed it as an opportunity to learn from the experiences of their counterparts in China.

Mr. Wang Yan then spoke about FD Johnson’s experience in Ghana – both from a personal and corporate point of view. He noted that the country is growing rapidly, but there are also many areas in which more development is needed. He had positive remarks about government support for development that will benefit its citizens. He also spoke of how, working with other interested parties, FD Johnson had helped establish a national medical system. In addition to supplying ambulances, the company also provided much-needed managerial and technical know-how. Mr. Sheriff Balogun then took a look at the 800 years of trade relations between China and Africa and concluded that there are good prospects for the future. Most of the fastest growing economies in the world are located in Africa and because of the sheer number of its young people, the African workforce will overtake that of China very soon, he predicted. Mr. Balogun also pointed out several areas in Africa in which China could invest:
- Electricity
- Agriculture
- Natural Resources
- Telecommunication
- Banking/Finance
What Africa needs is infrastructure development including a power grid, roads and telecom, he added.

Touching on the topic of ‘the image of China in Africa’, he stated that while in the past very little was known about China, through their hard work – especially evident in the speed with which construction projects are completed – the Chinese have impressed Africans. He pointed out, however, that there are still some negative connotations associated with China such as cheap products, poor quality and questionable health standards. He told the audience that he is sure China is capable of producing high quality goods, but the Africans have to ask for it.

Adding his thoughts about the China-Africa relationship, Mr. Michael Lu made the point that while China and Africa definitely need each other they are reluctant to truly commit to the relationship. They “keep dating, but just won’t get married,” he said. He also picked up on Mr. Balogun’s last comment, saying Africa has a very good environment and high quality food, exactly what China needs, but due to import restrictions, it is rarely imported. As the last speaker of the evening, Ms. Linda Labi brought up the importance of education in bridging the gaps and facilitating trade collaboration. China-Africa trade now only flows one way, but real collaboration always goes in both directions, she said. There is a need for trust to be built up on both sides, along with collaboration in developing products together, she advised. She pointed out how important it is to have role models such as Prof. Kwaku Atuahene-Gima, an example of a successful African in China, to combat the often negative reports about China in the African media. Prof. Atuahene-Gima agreed that China needs to do a better job of marketing itself in Africa.

The evening ended with a networking session that facilitated further discussion among the Chinese and African alumni.